Unusual Things To Eat in Africa

Unusual Things To Eat in Africa

Fortunately the expression, ‘one man’s meat is another man’s poison’ will not apply to you while dining out in Victoria Falls. However, you may come across a number of unusual items on the menu.  Some of these will be traditional meals in the true sense of the word, while others may be modern adaptations of old favourites. You can be assured that you will be faced with some items that will make you think twice before you tuck in though.

It is a well-known fact that Mopani worms are eaten in a number of African countries, such as South Africa, Zimbabwe and Botswana, and that the Masai enjoy a dram of ox blood on occasion, but did you know that some Namibian locals are fond of a little bit of bullfrog every now and again?  You can rest assured that none of these ingredients are commonplace in any of the restaurants in Victoria Falls that you are likely to be frequenting, and they won’t be snuck on to the menu either.  Of course, you are welcome to seek out the novelty of these unusual snacks if you wish – apparently Mopani worms taste like peanut butter, and they are very nutritious too.  Let us know if you have tried them…

The first common African delicacy you are likely to encounter, especially if you are going anywhere near South Africa, is biltong.  This consists of raw meat, cured with jealously-guarded spices and techniques and then dried.  It is quite similar to American jerky, is simply delicious, as addictive as peanuts, and made with various meats including chicken, ostrich, beef and all kinds of venison. 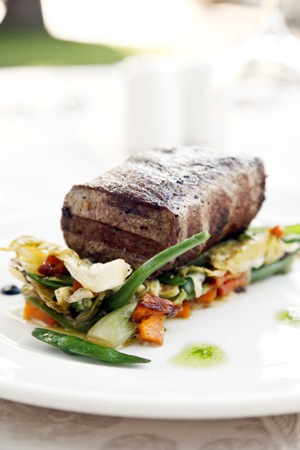 Mealie meal is a very common carbohydrate in most African countries, and goes by various names such as pap, putu, fufu, ugali and sadza.  Although an acquired taste, and quite bland at first, a good tomato and onion gravy, or a relish made from pumpkin leaves and peanut butter, can do a lot to elevate this humble grain.  This thick porridge is generally eaten with the hands, by rolling it in to a ball and dipping it in the sauce, but there are no universal rules of etiquette associated with this dish.

Another common offering in Victoria Falls restaurants is a variety of game meats.  Depending on what is in stock, you may get a chance to sample some crocodile, warthog, kudu, ostrich or impala.  You can rest assured that the accomplished chefs at these establishments know just how to bring out the very best in these meats.  This is especially true when they are doing the cooking over an open fire, with the night sounds of the bush all around and only torches as a source of light – setting the scene for an unforgettable evening in Africa, no matter what is on the menu.