The Highs and Lows of Victoria Falls - Ilala Lodge

The Highs and Lows of Victoria Falls

The Highs and Lows of Victoria Falls

During the month of November, there is always much speculation over how much water is flowing over the Victoria Falls – especially so this year, after a particularly long dry season. In this post, we try and answer some of these questions on the highs and lows of Victoria Falls.

How is the Water Flow over the Falls Measured?

The Zambezi River Authority was established in 1987 and is the body that monitors water flow along the Zambezi River to Kariba, through its hydrometric network. There are thirteen stations along the river where water levels are monitored daily – one being the Victoria Falls/ Big Tree station.

What are the Annual Variations of Water Flow?

If you take a look at our sunrise series videos from 2019, you can tell the difference in water flow during high and low water season. Here is a comparison between April and November 2019.

What do the Historical Records say? 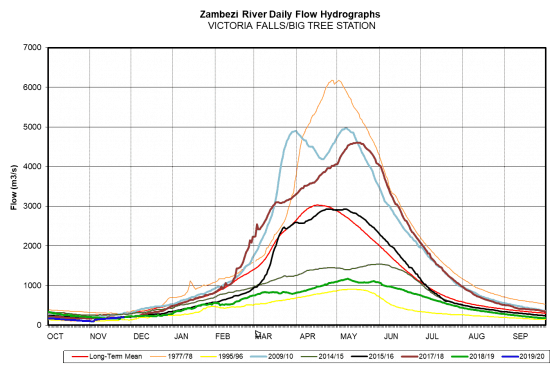 This year has been one of the driest on record, but not the lowest as the water flow was an estimated 3cm higher than the lowest level recorded back in 1995.  As you can see from the table below, the water level has started to rise with the first rains, and this trend should continue for the rest of the season.